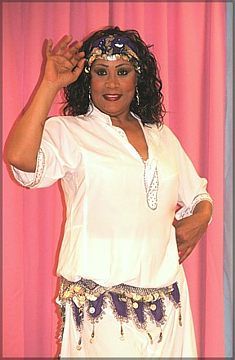 I’ll never forget this lesson, which I learned from one of my favourite Egyptian teachers, Aida Nour.

It confused and annoyed all the high level dancers and teachers who were in Aida’s workshop at the time. But the principle I learned that day has made an enormous difference me and to all the dancers I’ve mentored since.

It’s a weird lesson, that can really worry experienced dancers, but my goodness it is powerful and it can really transform your dancing.

This was an advanced workshop. Small and exclusive, all of us there were  professional dancers or well-known teachers.

Aida (one of the stars of the 1980’s and by then a popular international teacher) was teaching us a challenging choreography.

We were all pretty proud of how quickly we were picking up the choreography, but Aida became increasingly irritated with us because she said that none of us were dancing on the beat.

So we upped our game, concentrated and made sure we were dancing cleanly and really listening to the music.

But the more we concentrated and the harder we tried, the more irritated Aida became.

Finally it all got too much for her. She told us we were just impossible and, exasperated, she ordered me to video everyone dancing the routine, herself included.

She then left the room (in pretty high dudgeon) and told us to review what we were doing wrong.

Well, I’m a trained classical singer with a strong sense of rhythm and I was flummoxed. I knew I had been dancing on the beat. And the video confirmed it. But oddest of all, the only person who wasn’t dancing on the beat was Aida Nour herself! She was behind the beat throughout.

And there, of course, was our answer. We were hearing the beat as punctual Brits. She heard it as a woman from a hot country with little sense of urgency. Arabs use the term ‘English Time’ to mean punctuality. In practice it means being only half an hour late!

When she came back in (after having had a cigarette to calm her irritation!) Aida confirmed our suspicions. We were indeed dancing ‘early’.

And of course the more she had complained, the earlier we had become. No wonder she found us infuriating!

Later she explained that (in the opinion of Egyptian dancers) no-one outside Egypt hears the music correctly. It wasn’t just the Brits, it was everyone – from the US to Japan, Norway to South Africa.

I’ve heard it said by Egyptians time and again – dancers and ordinary people alike. No-one dances bellydance like the Egyptians. No-one feels the dance or hears the music like them. Good try but no cigar.

That was a lesson that I not only took to heart in terms of being more ‘Egyptian’ in my styling, but over the years I’ve discovered that being a little late is a powerful way to create more connection and flow in your dancing.

It takes good coaching by a very experienced teacher to make sure you’re not overdoing it, but learning to ‘lay back’ on the beat, to be a little late, stops you from rushing, calms you down and enables you to be far more present when you dance.

I teach the concept to all the advanced and professional dancers I mentor in my Undeniables Gold programme and it makes a world of difference to their dancing.

The reason I say it takes a good coach to help you understand it, is that obviously, the ability to dance on the beat is one of the most important things a dancer must do.

But if you want to achieve that effortless flow, connection and ease of the great dancers you see performing, then it’s one of the most powerful lessons you can master.

Being on the beat, but just that little bit late. And channelling that relaxed Egyptian vibe!

PS next time I'll show you one of my absolute favourite moves, which I learned from Aida Nour. And if you'd like to comment or ask me any questions, just drop me an email at charlotte at charlotte desorgher dot com. I always love hearing from people (even if I'm sometimes a few days late replying!)

1 thought on “One of the most powerful lessons I ever learned!”